My grandmother was born in 1940. She was the youngest of nine children. Her family moved to Likely when she was very young. At her time Likely did not have a school. Instead she was taught by her older sisters. Her brothers did receive some lessons from the older sisters, but they had to spend a lot more of their time working and helping their dad. My grandma remembers having to learn things like reading and writing and math, she was never a huge fan of math.  As she got older she had to spend more time helping with her oldest sister’s kids. When my grandma was around 12, a lady named Mrs. Murrey decided to open a school in her home. It was here that she taught many of the local Likely kids. It was not until after my grandma was done school that they built a small building where Mrs. Murrey continued to teach for many years.

SHARI BOUCHARD (My Mother, and the youngest daughter of Gloria Harms) 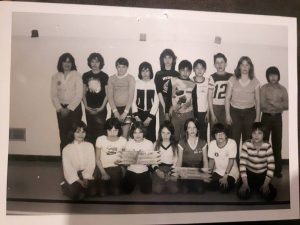 My mother attended Likely school for 10 years, from 1974-1984, it was in the same building I would later attend. The school ran from grades 1-10 and often was arranged with split classes. Having 2 grades per classroom. My mom attended Likely school when Likely was at its biggest point, and therefore the school was at its largest capacity of roughly 175 children in attendance. With this many children attending the school they had access to a lot of things the bigger urban schools had. My mom recalls being able to have the choice between woodworking, mechanics and home economics for an elective. The school even had access to computers where she was able to take typing classes. They also had enough students in the school to have sports teams and were able to travel to other schools in the district to compete. Unlike when I attended Likely school it was often ran by faculty and parents were not involved as much.  My mom recalls her experience at Likely school being very normal and positive, and she did not find that it hinder her experience in learning. 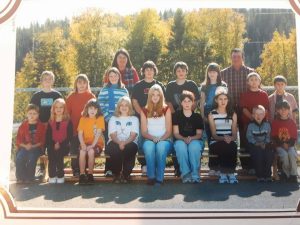 I attended Likely school from 1997- 2005. In my very early grades the school was significantly larger, with roughly 50 kids in the school. However, by the time I reached grade 5 the number of students dropped significantly to approximately 20 kids. The school was divided into two classes. The primary class grades k-4, which was taught by a married couple, Mr. and Mrs. Giltner. And the upper grades grade 5-7, different subjects were taught by 3 different teachers.

Attending a small rural school had an impact on the relationships students had with each other. Most of us were cousins to one another and we learnt that if you got in a fight with someone you often had no one else to play with, this resulted in less petty arguments and instead lifelong friendships.

Throughout my years at Likely school there was a significant turn over in staff. Some staff members stayed at the school for my entire 8 years, while others came and went year after year. Many of the staff at the school did not live in this rural town so instead had to commute an hour to work each day, this played a significant factor on how long they would work at the school. Often the staff that remained at the school were the ones who lived locally.

Our small rural living gave us the freedom to explore new ways to live healthy active lives. One year when Mr. Theisen was the principle he came up with the idea that our school would walk across Canada. Every morning the entire school would go for a 2 km walk before the start of classes. For every Km a student walked we would add it to our “walking across Canada” bored. This was a significant addition to the Likely school and was something we continued to do even after Mr. Theisen had left the school. We reached our goal and continued onto a new goal afterwards. I think this activity was helpful for the students. We started every morning outside getting exercise and it helped our ability to focus in the classroom and be ready to face the day. Another significant addition to our rural lifestyle was our playground. We had a playground very much like every other standard school with swings and a jungle gym. However, what made our school unique was our access to play in the forest behind the playground. It was rare for us kids to play on the swings, instead we would spend our time in the woods running around playing make-believe. I think this active natural outdoor play was also a great asset to Likely school and helped encourage our creativity. However, with all these plus sides we did lack something that is a major part of a child’s schools experience and that would-be sports. Because the number of students was so low we were unable to form sports teams and could not compete against local schools in tournaments.

Though Likely school had many great things about it, it also had some flaws. With the higher teacher turn over it was hard to stay connected with a teacher. I remember in grade 5 math class my teacher at the time was also the principle and there for very busy. He would often give us times table sheets and leave the classroom to go and do other work. I think this played a significant role in my my lack of basic math abilities and it is a reason I needed a tutor once I went onto high school. We also had teachers in the primary class that were more concerned with the creative process then the academic one. It is because of them that I struggled with spelling my entire life, as they encouraged me to spell things how I wanted to, rather than how they should be spelt. I also had a teacher who put a lot of pressure on her students and would often bring them to the front of the class to yell at them. She is one of the reason I cheated in grade 4 to avoid public shaming.  I don’t think this necessarily has to all do with being a rural school but rather just poor teachers, I can’t even fully say these teachers are all bad. The primary teachers who encouraged my creativity are the reason I love to write stories to this day and they play a big role in my art. The teacher who made me cry in front of the class may be the reason I strive for great marks so that I don’t feel ashamed. No matter what, these teachers are a part of the reason I have chosen the path of teaching for myself.

Something I find a joy about Likely school, but others might find a hinderance was the fact that parents played a major role within the school. It was the parents of students who would run the home economics classes, or the after-school homework clubs, it was also parents who ran the school library and a parent who helped volunteer in the office. Often parents were the ones who put on the Christmas plays or other holiday events. I remember a local man came in and taught us woodworking skills in grade 6. I even recall times where we had parents of students be substitute teachers when needed. The importance of the community was very evident within the school. And I know the school would not have ran the same, and the students would not have had as many opportunities if we did not have parents and people of the community volunteering.

An interesting fact and one of the reasons I chose the topic I did for my research paper is the fact that; in my age range of students who attended Likely school, which is roughly 13 children only 2 of us have gone on to post-secondary education. I find this interesting because what is it about the foundation of our education that may have played a role in our choice to continue education into our adult lives?
Through my research paper I learnt that this is a wide concern and studies have been done to show the challenges students of rural schools face.